The iPhone looks a bit fresh, slick and feels very sturdy. I like the color alright but I always use Apple leather cases on my iPhones and those colors released do not quite go with the Sierra Blue phone. I ended up getting purple and it is not quite a match. Apple should have released the Blue Jay color in leather as well. For me the Pro Max phones are hard to handle without a case and there are no better ones than Apple leather cases. The new phone slips out of your hands easier than the 11 pro max, which was much easier to hold with the case than this.

The audio quality improvements (increased clarity and fidelity) are great on the 13 pro max and you can see that in the speaker mode as well. That alone can justify the upgrade for me but for some minor setbacks, more on that later. While at home I use Wi-Fi calling and it is super clear, better than the previous phone. The 120 hz refresh rate that auto adjusts based on the need for it is a welcome addition. Scrolling looks great and so does video playback. Although I do not play video games on iPhones, it can be a game changer for those who do. The other major improvement is the speed of processing with the improved processor, you can see the iOS completing tasks faster.

I liked my old Apple 11 Pro Max, but needed a phone with [****] as 64 GB on the 11 pro was too small and the carrier ran out of other sizes at the time I got it. The storage capacity offerings that Apple released the new one with can be very important for some consumers and I am really happy with the [****]. I have a big Spotify library, a photo library of my family and extended family as well. Whatsapp takes quite a bit too and I already filled almost half the storage.

Battery improvements over the 11 pro max are small and really should not play a part in your decision to upgrade, if you are upgrading from a 12 pro max it is a significant difference. The 13 Pro Max has a good camera package and that alone can be worth upgrading for folks who need it, but for me the quality of the pictures and videos with the old phone were just fine for casual use for most occasions. I have good Nikon equipment for serious pictures and a good camcorder. Apple’s ios15 privacy protections can be used on the older phones too, but on this device the new processor and 5G can make a difference in speed with VPN and private relay feature for iCloud.

Negatives:
I use a lot of apps: financial, grocery, shopping, sports, news, Spotify, podcasts and travel. Most of the apps show really small font in large areas of the screen. There are no settings I know of to fix that, this happened with the new phone and iOS 15. I did not have this issue with the older phone and previous iOS. The settings do not change the font size in the apps entirely, meaning it leaves certain important portions of the screen unchanged (you can increase the text size in iOS settings and add the text size feature in the control center and try what works best for you). For example, on the some app, while writing this review, the font couldn’t be increased no matter how big I go, it just increases in some areas, same case with my other shopping apps. This is likely not Apple’s fault but the Apps are to blame. However, that small font shouldn’t have been allowed by Apple.

While away from home and not connected to Wi-Fi I have had choppy phone calls for which the carrier recommends turning off Wi-Fi calling as 5G or even 4G should provide good quality. This setting change is a hassle as I like using it while at home. I will need to observe this more.

The 13 pro max is also harder to handle even with the leather case comparatively and you can easily feel it is quite a bit heavier. It is impossible to handle it in your hands without a case as it is very slippery and heavy. You almost always have to use two hands, as the 6.7 inch phone with a rather large bezel is too big for most. If you are not already using a holder in your car for your mobile phone, you have to now. I would rather have the old size because of the weight issue, but all the improvements need that extra space and mass. Also this one slipped out of my pocket while sitting in the car seat a few times already while the old one rarely did. Another issue I noticed several times is that safari freezes up on me on the new one, likely iOS 15 bugs. The bugs are likely temporary unless there are hardware problems that cannot be corrected with software updates. The smaller notch is slightly better but still a negative as it looks weird along with a big bezel, which is pretty un-Apple-like.

Summary:
All in all the upgrade is worth it for me but really the new one is not quite necessary if you are a light user and have iPhone 11 or 12 for most use cases, nevertheless it is worth considering it as you may discover an important feature you wo...

♥️ I absolutely love my Iphone 13 pro max. I joke around with my friends that it's an iPad micro.

📸 It has the best camera ever put on an Apple phone. The triple lenses can really create a beautiful picture. It has 3x optical lens and can take in 2.2x more light than before.

🌆 Yes the battery is good. But what I've been most excited about is the 1TB of storage. Long gone are the days where you didn't have room to download a video for the road, had to delete an app to make room for an email, or shoot video in power quality to save on space. 1 TB will hold everything you need.

🔮 I also am really happy that they switched to the USBC plug. That's the future so why delay.

I love my new iPhone.

The phone is 5 stars. The price tag is pretty high, so I’m doing 4. 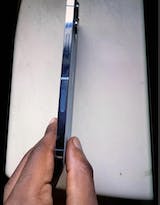 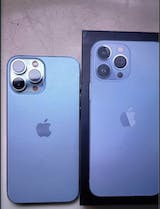 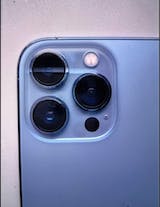 This IPhone pro max is the absolute valued phone for the price, FrugalShopper offer is the great value amongst any retailer that I believe in.

I loved my phone. Wonderful investment 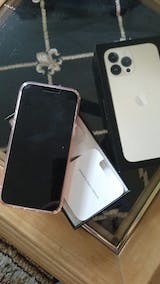 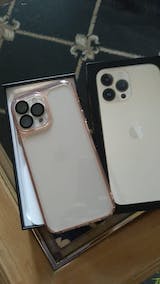